Parents, this one is really just for you: a San Diego mom is thinking twice about handing her cellphone over to her toddler after her tech-savvy tot – unbeknownst to mom – bought a $430 couch online while playing with her mom’s cellphone.

“I was just so shocked,” Isabella McNeil told NBC 7 Thursday. “I thought, ‘Did I buy a couch in my sleep?'”

McNeil has been in the market for a new couch and was recently browsing through options on the Amazon app on her cellphone.

Last week, as McNeil sat on her couch at home and browsed Amazon, Rayna – in true toddler fashion – walked up and said, “Mama, phone. Mama, phone.”

McNeil caved in and handed the device over to her daughter. She didn’t think much of it.

But little Rayna had other plans.

And mom, well, she wasn’t part of them. 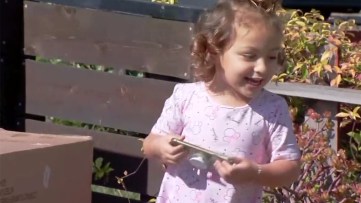 McNeil said she had left the Amazon app open on her phone. When Rayna was playing with the phone, the toddler unwittingly pressed the “Buy Now With 1-Click” button on Amazon.

And, just like that, the tot made a power purchase: a $430 tufted, grey couch.

McNeil had no idea it happened. She only found out a few days later while she was at work. The mom told NBC 7 she received an alert on her phone that read, “Your couch has shipped.”

“I said, ‘What? My couch has shipped? I didn’t remember ordering a couch.'”

Soon, she remembered that moment when Rayna had been playing with her phone and McNeil connected the dots.

“Lesson learned,” McNeil said. “Now I know it’s really dangerous and [I need] to make sure the Amazon app is closed before my daughter takes the phone. It’s just so easy.”

McNeil – embarrassed by the incident with her tiny couch-buying culprit – said she immediately began trying to figure out if she could cancel the order. It was too late.

The couch, as promised, came right to her doorstep in a big cardboard box. 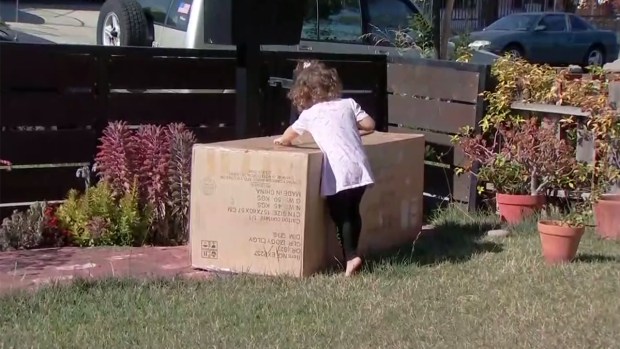 Rayna McNeil inspects the box carrying the couch that she accidentally purchased on Amazon while playing with her mom’s phone.

The box remained at her house Thursday, little Rayna walking over to it with curiosity from time to time.

McNeil said that when she looked into getting a refund on the couch she learned there is a $79 restocking fee for the piece of furniture, and she would need to foot the bill to ship the large box back to Amazon, which is around $100.

At that rate, she figured she could make more of the money back by trying to resell the brand-new couch on OfferUp, Facebook Marketplace or Craigslist.

Her listing on OfferUp includes this description: “Brand new in box. Ordered it by mistake, my toddler actually did…darn buy with 1 click on Amazon. Anyway, it’s more of a hassle to ship back, so I’ll take a loss.”

McNeil said she’s gotten some interest on the couch, but she’s holding out to get an offer as close to the $430 as possible.

Meanwhile, she’s starting to see the comedic side of the incident and she’s hoping other parents learn from her mistake.

She said parents, herself most certainly included, should be more aware when handing their phone over to their child.

“Make sure all of the apps are closed, make sure your passwords are fingerprint-locked, make sure they don’t know your number password, because kids are a lot smarter than we think,” she said.

As for Rayna’s taste in home furnishings, McNeil joked that this proves the toddler has an eye for nice things. However, the tot may need to work on her bargain hunting skills.

“[It cost] a lot more than I would ever pay for a couch,” McNeil added.

During Thursday’s interview with McNeil, Rayna and her baby sister played like little ones do. At one point, Rayna repeatedly squeezed a high-pitched toy and McNeil admitted, it’s times like that when moms just hand over the phone, if only for a moment of peace and quiet.

“Sometimes, when you’re a mom and you’re just in that desperation and you just kind of want them to settle down, the first thing you go to is, ‘Here, play with my phone for a little bit,’” she said. “It’s not worth $179 to just let her play with my phone. Now I’m going to be a lot more aware of my Amazon app.”

As McNeil spoke with NBC 7, her littlest daughter got a hold of her phone for a brief second.

“They just like to play,” the mom said, wiggling the device out of the baby’s hands.

When she looked to see what buttons the baby had pressed, she saw the baby had gotten into Zillow, a real estate app.

“See? That’s why I need to lock this,” McNeil laughed. “She’s about to buy a house on Zillow.” 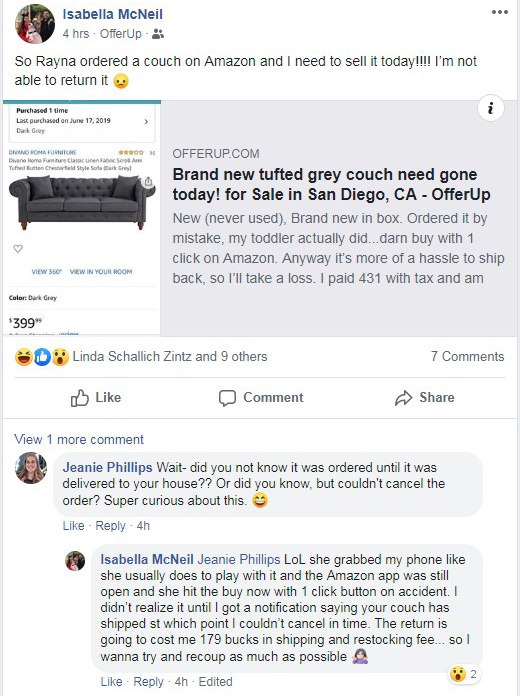 Isabella McNeil is now trying to resell the couch that her toddler accidentally bought on Amazon.