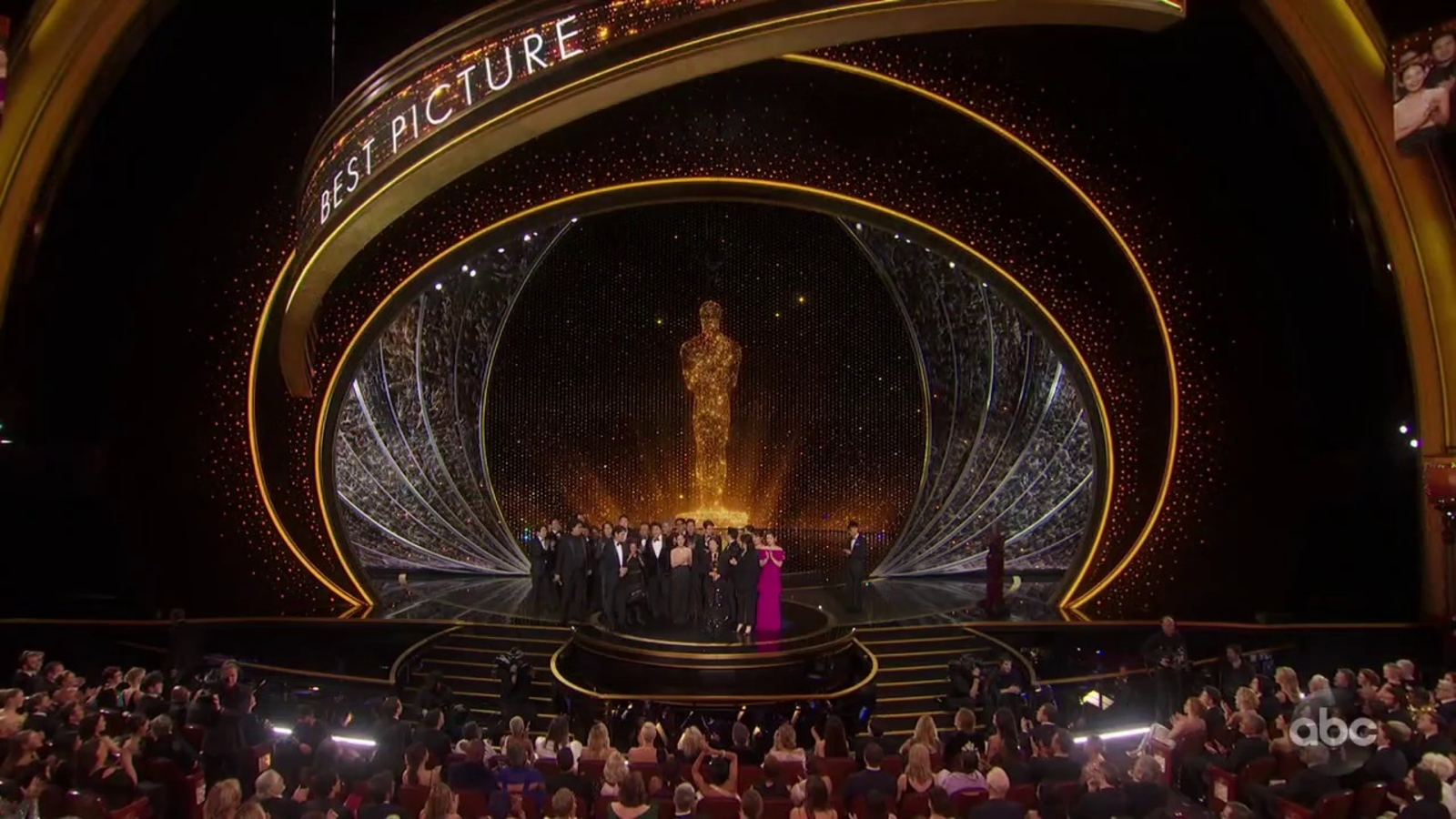 The dark comedy, centered around income equality’s wild influence on two families, is the first foreign-language film to receive the biggest honor in film in the 92-year history of the Academy Awards.

True to its name, “Parasite” simply got under the skin of Oscar voters, attaching itself to the American awards season and, ultimately, to history. The win was a watershed moment for the Academy Awards, which has long been content to relegate international films to their own category.

In a year dominated by period epics, “Parasite” beat out other best picture nominees, like World War I epic “1917” and Quentin Tarantino’s industry-glamorizing “Once Upon a Time … in Hollywood.”

The win for “Parasite” – which had echoes of the surprise victory of “Moonlight” over “La La Land” three years ago – came in year in which many criticized the lack of diversity in the nominees and the absence of female filmmakers. But the triumph for “Parasite” enabled Hollywood to flip the script, and signal a different kind of progress.

In doing so, the film academy turned away another history-making event, again denying Netflix its first best-picture win despite two contenders in “The Irishman” and “Marriage Story,” and a big-spending awards campaign blitz.

“Writing a script is always such a lonely process. We never write to represent our countries. But this is very first Oscar to South Korea. Thank you,” said Bong upon accepting the best screenplay award.

Although “1917” took home several prestigious awards this season, “Parasite” won best ensemble from the Screen Actors Guild, which was significant considering actors make up the largest percentage of the film academy.

“Although the title is ‘Parasite,’ I think the story is about coexistence and how we can all live together,” said Song Kang Ho, one of the film’s stars, through a translator at the Screen Actors Guild Awards.

The film, however, was not nominated in any of the Oscars’ acting categories, despite the star power of actor Song Kang Ho, who plays the Kim family patriarch.

Bong, affectionately nicknamed Director Bong by his American audience, has worked in the industry for 20 years, previously recognized for post-apocalyptic film “Snowpiercer” and fantasy tale “Okja.”

The 50-year-old filmmaker said he knows there will be pressure with what comes next. For now, he is just enjoying this most unusual experience.

“I saw Martin Scorsese three times across four days and then I would be eating and realize that Joaquin Phoenix is right behind me,” said Joon-Ho. “So it’s a very surreal experience.”

“Parasite” is a poignant story about income inequality, a talented ensemble cast and an academy membership that has grown more international in recent years. Bong walked the red carpet with eight actors from the film, noting that actors and others from the American film industry were excited to meet them.

“I don’t necessarily think it’s fair to separate films into English and non-English,” he said. “I think as long as they’re beautiful, it’s cinema.”

Bong isn’t sweating whether he leaves with a trophy. Mostly, he’s excited that the Oscars end a five-week trip away from his home in South Korea.

“After the ceremony, there will be a party, and after the party I will get to go home,” he said. “So thinking about those two things, doesn’t make me nervous at all.”

“I think that’s because it’s a very contemporary story that this film explores with humor, with cruelty and I think that’s why audiences in Korea, the U.S., all over the world – it leaves a lot of food for thought for everyone, a lot of complicated thoughts,” said Joon-Ho.

The man behind the movie says the South Korean press has written so many articles about “Parasite’s” nominations, he actually had to give up trying to read them all. Still, he is loving all this goodwill.

That process includes Joon-Ho continuing his work on two projects he’s been creating for years now.

At 50, he’s been at this for 20 years and he knows there will be pressure with what comes next. For now, the filmmaker is just enjoying this most unusual experience.

“I saw Martin Scorsese three times across four days and then I would be eating and realize that Joaquin Phoenix is right behind me,” said Joon-Ho. “So it’s a very surreal experience.”

Mickey Hyun, from the Korean Cultural Center of New York, says while it’s a Korean film, the story is universal.

“Social conflict to inter-generational issues to capitalism, really, I think everyone can relate to that on some level,” he said. “And it’s really organically opened up so many waves of conversation.”

Speaking at the New York Film Festival, Bong said the story about an impoverished family scheming its way into the employment of a rich family is resonating all over the world.

Film at Lincoln Center premiered the film at the New York Film Festival and then began showing it to the public in October, and it has been the most successful new release in the center’s history.

“It is unusual these days for a non-English film to break through on this level,” programming director Dennis Lim said.

Parasite is still selling out on weekends and is so popular that the director has held Q&As at Film at Lincoln Center every few weeks.

“There’s a sense in which commercial cinema today is escapist or disconnected from reality,” Lim said. “But this is a film that I think shows you can make an accessible entertaining film that speaks to the social and economic realities of the world we live in.”

The Associated Press contributed to this report.