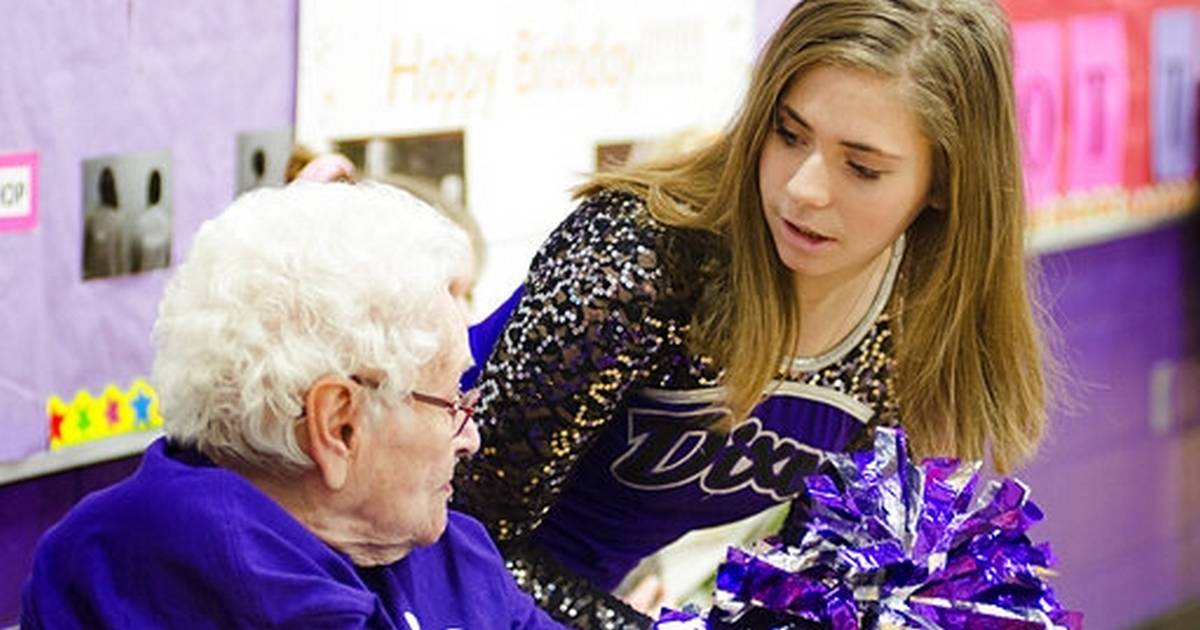 DIXON, Ill. — Living for a whole century isn’t easy, but Mabel Green has found a way to make it happen.

“Enjoy life and be cheerful.”

Green, 100, a resident at Liberty Court Assisted Living and Memory Care in Dixon, passed the cheers along one more time.

She relived her high school cheerleading days on Jan. 27, wielding pom poms once more to support the Reagan Middle School basketball teams during their games with Winnebago.

The Dixon schools dance team was with her to cheer on the future Dukes.

“I thought it was fun and exciting,” she said.

Mabel Brill was born on Jan. 20, 1920, in Oshkosh, Wisconsin, where she graduated from high school. She earned her nickname, “Mibs,” in high school, where she was a cheerleader who rooted on “the good, ol’ blue and white” of the Oshkosh Indians during basketball games in the mid-1930s.

“I had to jump up high and cheer loud,” Green said. “I enjoyed that. I liked the sports. They were fun. I enjoyed it. I didn’t dislike it, ever.”

She earned her bachelor’s degree in science at Milwaukee Teacher’s College, a predecessor to the University of Wisconsin at Milwaukee, before starting her first teaching gig as a physical education teacher at East Rockford High School in 1943.

As advisor of the school’s girls athletic association, she coached baseball, swimming, badminton, archery and basketball. She started a track and field program in her first year, starting with basic activities such as the 100-yard dash, basketball overhead throw, broad jump and high jump.


Basketball is her favorite sport and is a fun game, she said.

In the late 1940s and early 1950s, she served as division chairwoman of the National Section for Women’s Athletics Illinois chapter, where she advised teachers in northern Illinois about developments in women’s physical education.

‘œShe encouraged students to at least give it a try and promoted exercise with fun, laughter and good sportsmanship,’� her daughter Kim Green said. ‘œShe feels you remain young and live to be 100 by eating right, staying active, staying upbeat, and encouraging others to be positive and upbeat.’�

She married Charles Green, a counselor who later came to East High from Pennsylvania, and were together for 57 years until his death in 2008. She taught for 35 years, with most of her time at East, where she also taught girls to cheer on the “East Red and Black” of the E-RABS during football and basketball games.

“It was fun, and I liked the people I worked with,” Green said. “They were nice, and they were friendly.”

She also taught golf, tennis, bowling, field hockey, snow skiing and horseback riding, and taught dance in retirement up until about 15 years ago. She still does some bowling, albeit on a smaller scale, at Liberty Court.

The Rockford Peaches, a woman’s professional baseball team, played from 1943 to 1954 at Beyer Stadium just a mile west of the high school. The Peaches won four All-American Girls Professional Baseball League championships, and were the subject of the 1992 film “A League of Their Own.”

“They were a terrific group,” Green said. “They were outstanding.”

Liberty Court’s Dare to Dream program allows residents such as Green another opportunity to do something that they have always wanted to do once more. The idea came from Liberty Court’s parent company, Senior Housing of Cedar Rapids, Iowa, and Green is the second resident to be a part of the program.

Green always has a positive thing to say about everyone, Community Relations Coordinator Kelly Shroyer said.

“When they become a community member, we learn a lot about their history and their past, and their family tells us things that they would love to do again,” Shroyer said. “Nothing is out of limits. We really strive to work with the family to make whatever their dream is a reality.”

Melvin Leffelman, 91, was Liberty Court’s first participant; he rode a horse in November for the first time in years.

Green also taught some horseback riding in her day.

“I like horses,” she said. “When you ride them, you feel more closer to them.”

“That’s how they connect, especially when their memory is conflicted with a cognitive decline,” Shroyer said. “When they are remembering something, it’s so important to them. It’s a really special moment.”