Comedian Leslie Jones said her makeup artist called her “in tears” after allegedly being mistreated at a Sephora store. Her complaint Tuesday on Twitter came on the eve of the company’s “inclusivity” training for staff at its more than 400 stores nationwide.

Jones had asked her makeup artist to take her best friend’s wife to a Sephora store in New York to help her buy new products and learn to apply them, according to the comedian and a representative for the makeup artist.

But Jones said her makeup artist, Lola Okanlawon, called her “in tears” over how badly she and the other woman were treated by a salesperson and manager. Jones pledged in a tweet to no longer be a patron of Sephora.

She also offered a suggestion for the beauty retailer in an Instagram post: “@sephora you got to close your store to teach your employees sensitivity” and hire people with sensitivity. “Cause they exist!!! I’m tired of this sh–!! What happen to customer service. Do we just not give a f– anymore!! #NOMOSEPHORA”

A representative for Okanlawon, who has done the comedian’s makeup for the past two years, told NBC News on Wednesday that the incident occurred on June 3.

Foodies take a bite out of Taste of Wheaton 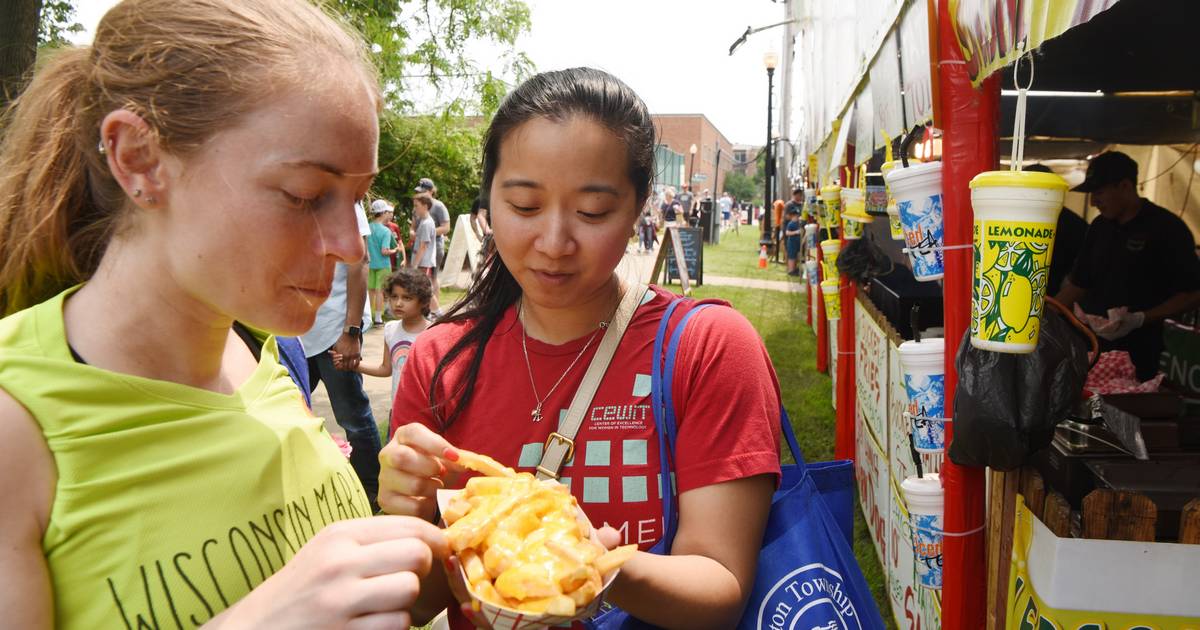 There’s a right way to chill out at the Taste of Wheaton, and Jim Philbin has mastered it.

To follow his example, you order the hickory smoked beef brisket sandwich from the Steamboat BBQ booth along Wheaton Avenue. You grab a fork and napkins because barbecue is supposed to be messy.

Then you plop down under the shade of a mature tree at Memorial Park even though it’s a cloudy afternoon. But this is a cooler spot than the picnic tables on the lawn near the Taste’s food vendor row, and it’s within earshot of the country band Summer Son covering party staples from the Memorial Park band shell.

“We come for the music,” Philbin says alongside his wife, Terry.

But the Glen Ellyn couple also knows how to make the most out of the menu at the Taste, a summer kickoff organized by the Wheaton Park District and chamber of commerce. If you’re a meat eater, Philbin highly recommends the beef brisket from Steamboat, an award-winning barbecue joint in a Wheaton strip mall and one of the hometown favorites at the Taste.

“They’ve got a special recipe for curing the beef,” he said.

The Glen Ellyn couple has been coming to the Taste for so long they know the Wheaton festival by its old name, Cream of Wheaton. And that’s what you still call it if you’re a sentimental purist.

And as such, they enjoyed the low-key vibe of the neighborhood park. So did Cecelia Coglianese, a first-time Taste patron from Schaumburg, who appreciated the fact that she didn’t have to contend with long lines for food.

“It’s a good day out for families,” she said.

There were bigger crowds south of the train tracks in downtown Wheaton for the Taste’s amusement rides and the usual carnival fare. But at Memorial Park, you can live your best foodie life at a food vendor row representing the downtown dining scene.

Gia Mia provided local fare with its mobile brick oven, as did Gino’s East, Choun’s, Moveable Feast + Co. and Graham’s Fine Chocolates and Ice Cream. As the newcomer in the bunch, Moveable Feast served ginger guacamole and wontons, its most-popular cookie and ginger kombucha on tap.

Pam Kurtz’s 5-year-old son customized his shaved ice with blueberry and mango flavors after the thrill of carnival rides. The Wheaton mom best summed up why families should take a bite out of the Taste:

The Taste ends its four-day run Sunday with the beer garden, food vendor row, and an arts and craft fair running from 1 to 7 p.m. Carnival hours are 1 to 8 p.m.

Neverly Brothers, Five Guys Named Moe and the Red Woody Band will take the stage of the Memorial Park band shell from 1 to 7 p.m. For the full Taste lineup, visit Wheatonparkdistrict.com. 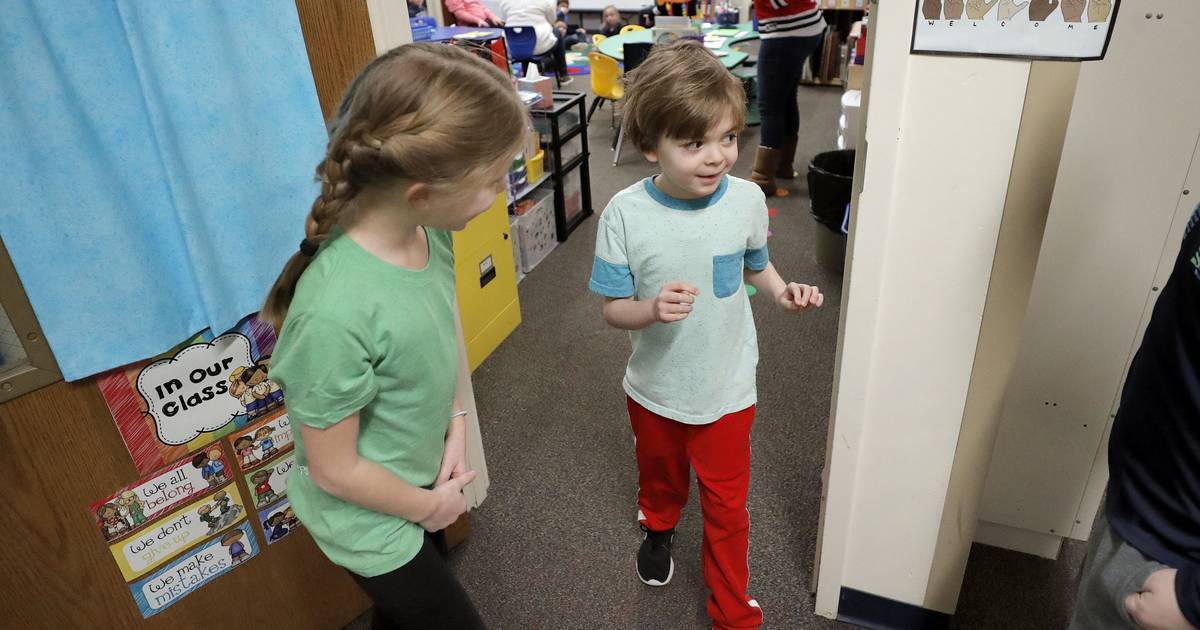 Noah’s usual shyness disappears as he walks with Faith to spend time with students in her classroom.

It’s part of a program called The Nora Project that Libertyville Elementary District 70 has adopted thanks to Terri Coughlin of Libertyville. When Coughlin learned about the mentoring program, she felt her school district and its students could benefit from it. Coughlin’s first child, Emily, has had ADHD and delayed language since birth.

“People take for granted what goes into having a kid that’s different and watching how that kid is socially. I think that’s why I’ve gotten so involved, because I know what it’s like,” Coughlin said.

The Nora Project aims to normalize differences, demystify disability and promote meaningful connections between students and their peers with disabilities. Lessons on disabilities are incorporated into the English and language arts curricula.

“To see The Nora Project spread to other districts, such as District 70, makes me feel very proud and it warms my heart to know that so many children are truly making a difference in the world,” Martinsen said.

Students used their iPads to compile photos and videos of their visits with Nora Friends. About 600 people attended The Nora Night Film Festival at Copeland Manor School in Libertyville, where they celebrated their year and watched a short film about the Nora Friends edited by students in the classrooms.

“My hope is that my students will discover in a very meaningful, memorable way that everyone has a unique story, everyone has gifts and challenges, and everyone needs friends,” Serrecchia said.

“Noah has the best time. He’s usually very shy in front of people but when he comes here, he totally grows and explodes,” said Noah’s mom, Laura Wood.

“For us, it’s all about educating people about people with needs and that leads to acceptance, which leads to inclusion,” she said.

Feedspot – A fast, free, modern RSS Reader. Its a simple way to track all your favorite websites in one place.

Feedspot – A fast, free, modern RSS Reader. Its a simple way to track all your favorite websites in one place.

CBS Chicago is comprised of Chicago’s biggest media brands in News, Sports, and Entertainment. It offers the latest news, weather & sports for all of Chicagoland.